Music Is His Religion And Love His Instrument: Happy Birthday To The Magical Mozart Of India

He is a man of music; he is a maestro, a music sensation of the millennium. His films might vary in their storyline but his signature touch lends the film a distinct feel. Allah Rakha Rahman this name self-introduces itself. He is the Mozart of music. A musical storm or Isai Puyal as they call him, fuses traditional and western together and makes music dance to his tunes. His music is full of mysticism, spirituality, love, life and folklore. A. R. Rahman, the hardworking musician of Bollywood, who scored gold at international podium as well, the Madras’ Mozart turns a year older today. However, his music makes him, and us, forever young. The sensational music that has the ability to creep up our spine and leave us with gooseflesh is as inspiring as it is emotional. Such is the talent of this man that while Bollywood copies the world, the world copies Rahman.  Like we said, he is the man of music!

A. R. Rahman, we know him as a musician but not many know that he happens to be a homemaker. He is a man who simply dropped out of school post his father’s death and shouldered household responsibilities. Even till date, he finds time to spend with his family and often dedicates his awards and accolades to his parents, especially his mother. True that it is his father’s inspirations and mother’s support that has made him what he is today. Without their love, support and motivation Rahman would have been just Rahman and not the Mozart Rahman!

We need not describe how wonderfully heartwarming Rahman’s music is! In words of Baz Luhrmann, “A. R. Rahman’s music always possesses a profound sense of humanity and spirit; qualities that inspire me the most”. And we agree with Luhrmann for Rahman is truly inspiring. Which is why we presume, Time magazine couldn’t stop itself from featuring Rahman amongst the list of World’s Most Influential People. They went on to call him a proficient music composer as well. But hey, receiving an Oscar speaks volumes enough for this guy. And having got a chance to perform at White house State dinner organized by President Barack Obama, what say then? And when his music album for film Roja appears in Time magazine’s list of “10 best soundtracks,” you gotta agree that this man is truly musical magic!

We present you with Rahman’s quotes on Music that define his approach towards his profession.

The idea of music is to liberate the listener and lead him to a frame where he feels he is elevated.

His music does exactly that to us!

Music has to flow, music has to be happy, both the performer and the composer have to be happy about it and, spontaneity is the thing.

And it is often when you see him performing; you see a soft smile spread across his face. It shines in his eyes too. Take a look….

Beautiful film music can be made relevant to any period.

Perhaps that’s why Khwaja is as much part of us as it was of the film Jodhaa Akbar.

Music is the only passion I shamelessly indulge in.

We are happy that you do, for without that music we won’t find solace in solidarity.

I think music, in my opinion, is not about motivation in the way it’s – it’s not a running base. It’s art. And my whole philosophy of music is different. It’s almost like cooking and serving to people, seeing them smile and enjoying the food, really.

We are absolutely speechless! 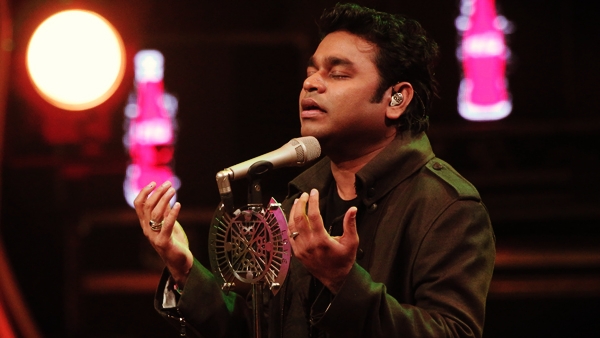 So long as you do it truthfully, music is not to be judged.

Judging is a word that automatically gets eliminated from our dictionary when it is Rahman’s music we are talking about.

The more I compose, the more I know that I don’t know it all. I think it’s a good way to start.

This has to be way of life for each one of us…’coz learning is more about unlearning and relearning.

Music is all about transporting people; speaking a language which languages fail to express.

For certain because in times when we are low or when we are overwhelmed, our words fail to express our feelings.

If you understand the essence of religion, it’s about love. Though it’s a cliché, it’s the truth, and it’s what I’m trying to do with my music.

Music is his religion and love his instrument.

Finally, it is this that defines him better…